After launching as a neurofunk-fuelled act in 2014, the mysterious duo known as the Zombie Cats have shredded their way to the top of the international drum and bass scene. With appearances on some of the most prestigious labels in the scene including Blackout, C4C, Viper, and most notably Eatbrain, there’s been signs along the way that the duo is capable of flexing on a broader range of musicality as their latest output on Technique can attest.

Over the past year the duo has been weighing all their options for moving forward and expanding their sound and brand. Do they kill the Zombie Cats completely and come up with a new name? Do they just continue on and hope that savvy fans will follow them no matter what the output? Or even better, do they relaunch the Zombie Cats with a complete rebrand that builds upon the success they’ve already achieved?

In many ways, the resulting shift is a combination of all of the above as you’ll soon see. With every death comes life, and the resurrection that the Zombie Cats have planned stays true to the ethos that the duo started with way back in 2014.

To celebrate the end of a chapter and to announce their launch into the future, Zombie Cats have not only sat down with us for an in-depth chat, but also hit us with an exclusive premiere of their aptly titled “Last Day” on Bad Taste. Determined to go out with a bang while transitioning into their equally exciting future check the exclusive premiere of Zombie Cats’ epic “Last Day” below before locking yours in here and diving headfirst into our in-depth Q&A.

Many fans have probably been anticipating this day for a long time now as your socials have been hinting at some changes behind the scenes. First off, is this the end of the Zombie Cats? If it’s not, what is this new, upgraded version of the Zombie Cats we should be looking out for?

It is definitely not the end of Zombie Cats, but you are right, we are ending a chapter. We started Zombie Cats in 2014 focusing primarily on I guess what is defined as neurofunk only. Over the past years, we wrote many tunes which did not quite fit the constraints of what the modern neuro sound is. So to us, this means this chapter is coming to an end. To end this first chapter of Zombie Cats we are going to release a track called “Last Day” on Bad Taste (big up to Vegas BCUK) and then the next chapter can start. I think an upgraded version is a good way to put it.

Does this mean the end of neurofunk for you or is it an expansion/evolution of your sound? Savvy fans may have noticed this shift already in tunes like “Far From Us.” Any other songs we should be checking out to get a sense of where you’re headed in the future?
In 2019 it is time to branch out and see a larger picture of all the sounds we love, as long as it is drum and bass. We will still have a love for neurofunk and we will keep releasing in this subgenre but do so alongside our other releases. “Far from Us” or “Need” are neither neurofunk or vocal drum and bass so this sums the direction pretty much up: it is drum and bass. We won’t give this new direction a name because that won’t do us any favors. Subgenres are great for finding new music but as an artist they can be limiting, so our genre was and will be drum and bass. If the tune has a cool vibe and energy, we are down with it. That´s what we are looking for.

Part of this shift in direction comes with a new look. Describe this new look and the masks in particular and what went into the design. Who designed it and what was the inspiration behind the masks?
It is obvious that our mask would be a design based on our name. We already experimented with a Zombie Cats mask two years ago on imagination-festival in Prague. Self-made Zombie Cats masks were made by our fans and it created a family vibe. That was really sick and the idea of wearing masks stayed in our head. What you are now seeing is not the Zombie Cats mask from back in the days. We wanted to start a new chapter, a new look—especially for the start. You can see differences in details now. The logo design, that means the cat-skull will stay, but the logo itself is updated.

The gold and silver masks on stage will be for special events. Talking about special events, our show at this year’s Let it Roll festival will be the first show of our new chapter, so of course we will wear them there. We don’t, however, want this to be a main focus of the show, as we won’t be leaning the whole act on a gimmick. It’s a bit of fun and showmanship to make us larger than life. After all, this is entertainment and we want to do our job properly.

The true origin of the new masks is a secret, but we can tell you that we used to play with He-Man figures as a kid. Skeletor had always a cool silver or golden-style. After seeing a documentary about He-Man and Skeletor again it was clear which colors the new masks would have. 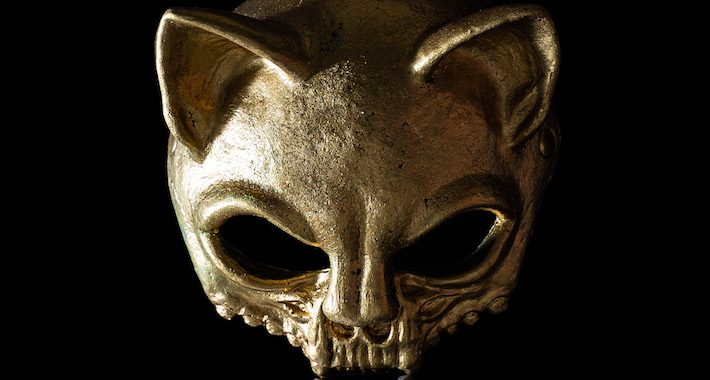 We imagine the same thought process went into the redesign of your logo as well! When you sat down to dream up the new logo, what vibe were you trying to capture and communicate to your fans, new and old?
Less serious and more open-minded. It’s more about enjoying the music rather than letting it define you. With a more lighthearted approach, you really can take it anywhere and not pigeonhole yourself and your style so much.

Set up this tune “Last Day” we are premiering on Bassrush. In many ways, this announces the end of a chapter in your careers while also setting the stage for the new day to come. How do you see the song communicating this and what do you say to your fans out there mourning the “death” of the old Zombie Cats.
“Last Day” started as a neurofunk tune and became lighter during the writing process. It is a good way to end and introduce a chapter, so people can see this tune as a bridge from old to new. After this song we really felt, Okay, this is it. We will end this chapter here with an announcement. We don´t want to shock our neurofunk fans by releasing different drum and bass music out of the blue, so the whole marketing strategy was planned to let people know something will be different and it is true, so much has changed over the past year. We have signed with a new booking-agency (Bassic.co), new people, new homes, new life-situations and, by the end of year, Zombie Cats the label.

We realize that a lot of people identify themselves through the music they listen to, so if you’re a fan of an artist and all of a sudden they swing 180 degrees on you, you can be left feeling like they have indirectly betrayed who and what you represent as a listener. We wanted to be careful with the people that appreciate and push our music, so this whole process is a part of making sure no one gets burned by it, after all, we will still represent a lot of heavy drum and bass.

Tell us more about your plans for the label. When should we expect the first release to hit and what we should be expecting from the imprint moving forward?
The label will drop the first single around late October. We are aiming to release a broad spectrum of DnB, tunes with a unique vibe but that are still playable in a mix. The first releases will be only Zombie Cats tracks but you can expect some collaborations in the future. We have a group of people we have been working with for years now, guys like Redpill, ABIS, and Safra. We are also working with some friends we have been meaning to make music with for a while now, so stay tuned… Also worth a mention is that our next release will be on DIVIDED (Abis & Signals Label) and we are super looking forward to it. It mirrors a similar variety that our own label is aiming towards.

Well, with your death comes a resurrection in the form of the “New Day” you’ve been hinting will be unveiled at Let It Roll this weekend. Give us a sense of what this “New Day” brings, why Let It Roll is the perfect place to launch the new vision, and what the audience should expect at both of your appearances this weekend.
Let It Roll will be the place of our resurrection and it is packed with action. We play on Thursday and on Friday we have a back-to-back with ABIS at the bus party. Then we will participate in the BEC [Beats Evolution Conference] and doing a panel on the same day.

As if this wasn’t enough we are also a sponsor of the DNB STEP World’s Championship 2019 at Let It Roll and one Dancer (Liv) is representing “Team Zombie Cats” in the tournament. Playing at a lot of events you get to meet a lot of people that love the music and some talented dancers. There will be also a DNB Step contest in Hannover, Germany at the end of 2019 so keep an eye out for that. Together with Hannover’s Vandalism party series, this event will be the first DNB Step contest in Germany and we are looking forward to being part of it. For us, drum and bass is a culture, not just music.

Talking about our shows from now on, we will stay true to our live performances. If you check out our live videos on YouTube you can see that we divide the opinion of people: they either love it or hate it. We don’t stand still during DJing—we are running around, partying with the people in the front row, we love what we do!