The long-awaited sophomore album from Bensley has finally hit the streets and the Canadian is in top form. Following the jaw-dropping success of his 2015 Next Generation LP on Ram Records, the Canadian youngblood shows no signing of veering from the genre-defying vision that originally caught the attention of Ram Records’ boss Andy C and helped launch him into the stratosphere.

Featuring 12 cuts designed to take listeners on an immersive journey through Bensley’s own influences and talents as a musician, Muskoka is a vibrant and awe-inspiring sweep through a soundscape that features elements of jazz, breaks, jungle, hip-hop, and of course drum and bass.

Whether it’s Bensley flexing on the alto saxophone or Armanni Reign stopping by to bless the project with his own inimitable lyrical flow, the project lives up to Bensley’s aim of honoring his fierce commitment to taking the drum and bass scene on his own terms. To find out more we decided to check in with Bensley for a wide-ranging conversation about the meaning behind the title of the album, the artwork, and how Bensley stays focused and confident in carving out his own path as an artist and musician.

What does the title of the album mean literally and how do you see the idea behind it framing the project as a whole?

“Muskoka” is the name of a region of lakes and forests in Ontario, Canada, a few hours north of Toronto. My family has had a cottage here for over 50 years, which means I’ve had the privilege of living on the lake every summer growing up! Since this has had a huge effect on the person I am today, Muskoka has a lot of sentimental value to me. While I wasn’t originally planning on writing an album about it, the sheer volume of personal music that I wrote while I was by the lake made the whole project come together very naturally!

This album is the follow-up to your debut LP which had the apt title Next Generation. How do you see this project as being different from that one? I imagine the goals are a bit different between the two. With the first you were establishing yourself while also perhaps even defending your position as the “new” star of the RAM family. Now that you’ve earned your keep, what were your intentions going in on this sophomore LP?
When I was creating Muskoka, I was definitely feeling the pressure to make an album that surpassed Next Generation in every way! Therefore, a big goal was to expand on my original style in a way that flexes creative diversity—be it through structure, genres, instruments or production techniques. If it was going to be enjoyable to listen to, it had to be enjoyable to make, and I always have to be challenging myself and trying something new. That yielded a lot of interesting results in the final product.

While I’m sure there’s been lots of highs (and lows) over the past few years, a standout moment has to be your set on the closing night at Andy’s XOYO residency! Tell us a bit about that night and perhaps any pressure you felt going into it, what your set was like for those who weren’t there and what you felt like when it was all said and done.
That booking came as a bit of a surprise to me, as I was a last-minute addition! Aware that the night is a celebration of the old school and underground, I knew what the crowd was going to be expecting. My sets are already relatively diverse, so I made it a fun challenge to try and squeeze in some jungle, classics and rollers amongst my own catalogue, and I think it went really well!

As if the music wasn’t enough, the artwork on the album is also literally a masterpiece as well. Introduce us to Umberto Ricchetti and remind readers about your ongoing relationship with him and how you two work together?
Umberto’s such a great artist! I originally was seeing him because he owns a hair studio nearby and I go there to get my hair cut. This was going on long before I ever made music, so we go back a pretty long way now!  To date, I’ve never commissioned him to make a custom piece to go alongside my music—I’ve just had a huge selection of his amazing art to pick from! They always seem to fit nicely, which I think says a lot about the relationship between his art and mine. 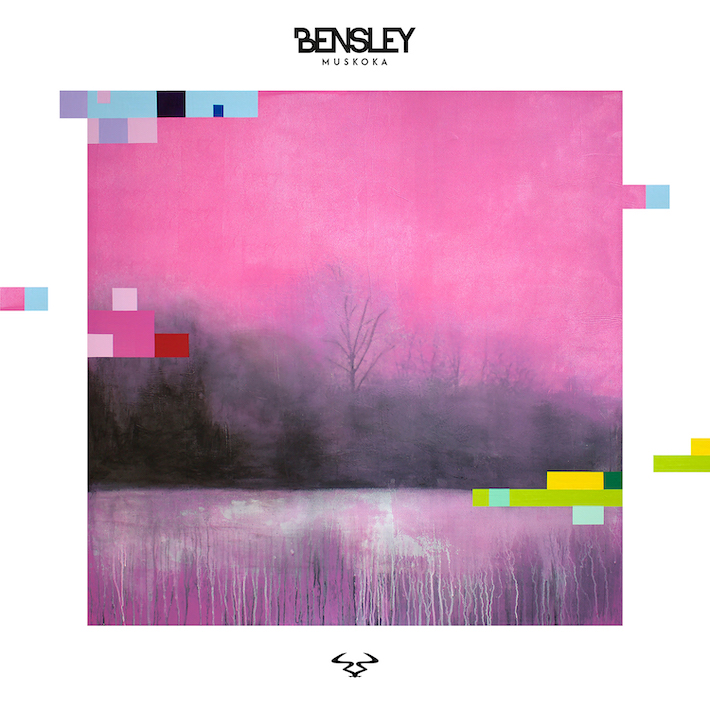 We’ve noticed a lot of melting trees and colorful pixels in the visuals. How do you see that as relating to your vision and sound?
I think these bits of flair nicely represent the contemporary/electronic aspect of my music, and give the listener a vague idea of what to expect from the album before hearing it. Given that these themes are also present in the artwork on Next Generation, I hope it also illustrates that Muskoka is stylistically a follow-up to my first album and an evolution of my sound.

In many ways, the album is also a testament to your ability to stay true to your own artistic instincts and not succumb to the desire to begin knocking out what might be considered standard drum and bass. How are you navigating the internal and external pressure you must have to deal with from the very beginning and what kind of advice would you give to any other up-and-coming artists out there carving a path similar to yours?
To be completely honest, my approach isn’t ideal if you’re trying to make a career as a drum and bass musician. The pressure to compromise my style has come from the scene itself and the way it rewards unimaginative and repetitive themes in favor of being loud and mixable. However, when all goes according to plan, my direction is the one that can result in the artist growing beyond the genre itself—and that’s what keeps me driven.

Where do you see yourself going from here?
I’m going to keep challenging myself by diversifying and raising the bar on my arrangements and productions. A more specific goal of mine is to use my saxophone a bit more prominently in my music and work towards using it in my shows!

Bensley’s Muskoka is out now on RAM Records—lock yours in here.